What I love most about Japan, (or at least second most after takoyaki), is walking along and randomly discovering a shrine or temple, like tiny, high gable-roofed Shinto shrines placed in carved nooks along a highway, and red-knit covered ojizou statues in the corner of a rice-field or the larger, but somehow equally well hidden temples, in quiet zones between school yards with massive trunked trees shielding from the concrete city metres away.

Wakayama is a treasure vault of unimaginably old, awesome, historically significant and culturally interesting temples and shrines. What it lacks compared with Kyoto is maybe having them all within an easy walking/busing distance.

But the true must-see of this 10 Reasons list, the ultimate zone of zen and favourite resting place of Sengoku samurai warlords and 80s bubble era CEOs is Koyasan. 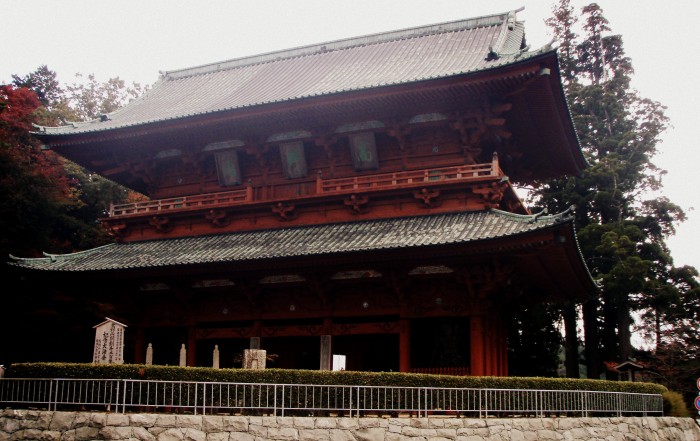 The great gate welcomes (and intimidates) all pilgrims and sightseers

A sprawling, mountaintop Buddhist conclave, founded by Kukai about 1200 years ago, and rightly given World Heritage status in 2004, Koyasan has the most amazingly serene atmosphere. It is rarely thronging with tourists, but also isn’t a museum exhibit, but still a living, learning community of monks.

It is said, I think in Lonely Planet, to be particularly popular in summer, when it is a cool haven above the tropical, steamer that the rest of the prefecture becomes. I personally think that autumn is when it is most beautiful; the bright yellow, orange and crimson leaves as the perfect backdrop for a street of vermilion, spired temples. Unfortunately, my 5 year old, pre-DSLR photos won’t do it justice.

A carpet of ginko leaves by a torii gate

Winter is also a highly recommended time to visit.

The snow, while exhausting to walk through, deepens the mystical ambiance. The cemetery and the half buried grave stones seem other-worldly, like something from Mononoke no Hime; sliding along treacherously slippery stone walkways, as the silent, giant trees  drop snowdrifts unexpectedly about you, the only colour bright, oversaturated ojizou statues in their red-knitted hats and bibs.

The depths of the cemetery at Koyasan

A treacherous trudge through the forest in the snow

Two childsized ojizou statues huddle together, as if for warmth, beneath the snow

Though he died while on campaign in Korea, this is where Hideyoshi, one of the great warlords of the Sengoku era, now lies 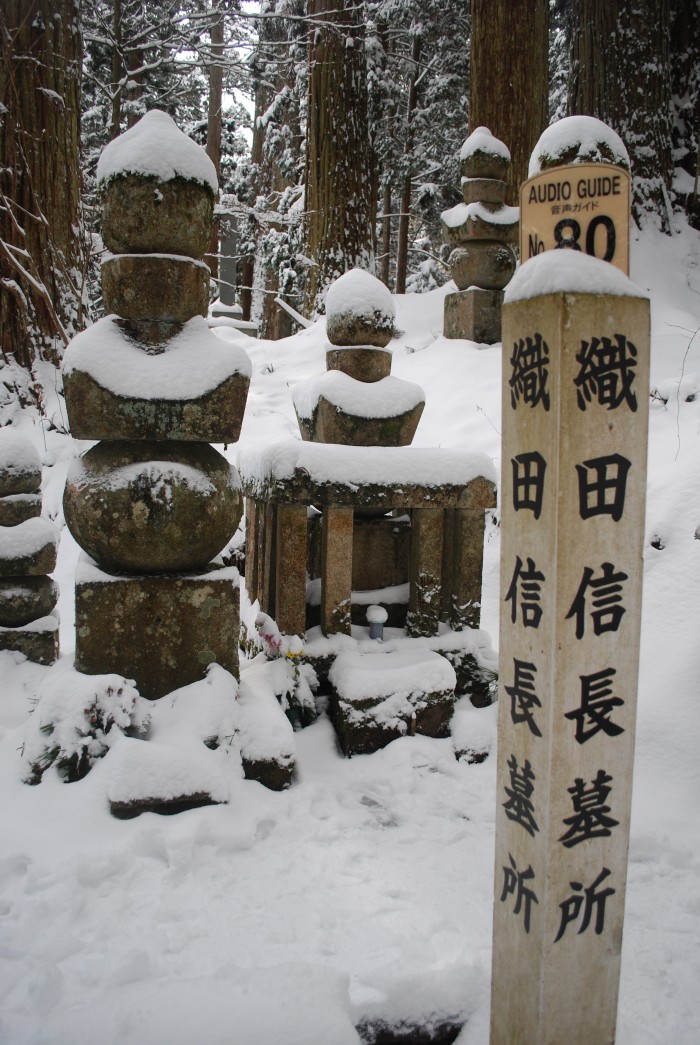 Nobunaga's grave is a little smaller and less 'off-limits' than Hideyoshi's. But considering how he used a the stones from a few Buddhist temples to build his fortresses, I guess he's lucky to be here at all

Note: Ieyasu Tokugawa, the ultimate Sengoku shogun, has a grave all to himself up in Nikko.

Weary pilgrims following Kukai’s footsteps around the island of Shikoku and up the ancient Kumano Kodo, finish their journey here, winding their way through a giant graveyard to a large temple where, it is said, the monk himself lives eternally.

A group of weary (well, maybe they came by bus), cold pilgrims wait to be shepherded through to Kukai's resting place

Koyasan is a popular burial spot for more than samurai and monks however, with big companies like Panasonic, Yakult and UCC Coffee establishing gravestones  here as memorials to those who died from overwork in their service (not true, don’t quote me). 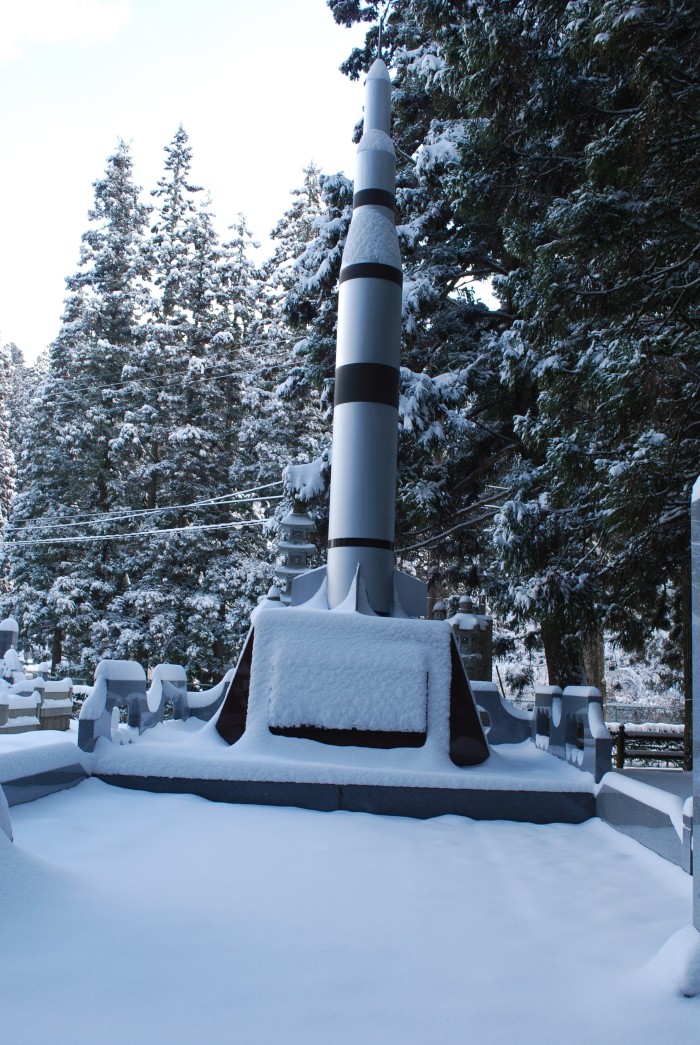 The rocket grave. I still don't know who is beneath this. (compensating... just sayin')

A grave for all things Yakult

From Wakayama city, Koyasan is a decent train ride, so it’s best to leave early in the day and maybe consider one of the highly recommended temple stays overnight.

Lots and lots of dolls

Awashima jinja is a place I keep coming back to.

The shrine is a storing house for dolls and avatars of gods and spirits, including the animals in the Chinese zodiac, Daruma, Maneki Neko, the 7 lucky gods, Kitsune foxes, Noh masks and hundreds and hundreds of Hina dolls.

A lot of people, Japanese especially, feel the atmosphere, being surrounded by hundreds, if not thousands of dolls is creepy. Though I have yet to see them, there is also apparently an underground room containing cursed dolls. One of which has hair that still grows…

I personally don’t find the atmosphere particularly spooky, but interesting and beautiful. I love exploring the collection, marveling at its variety and age. There is always some new detail to uncover here. 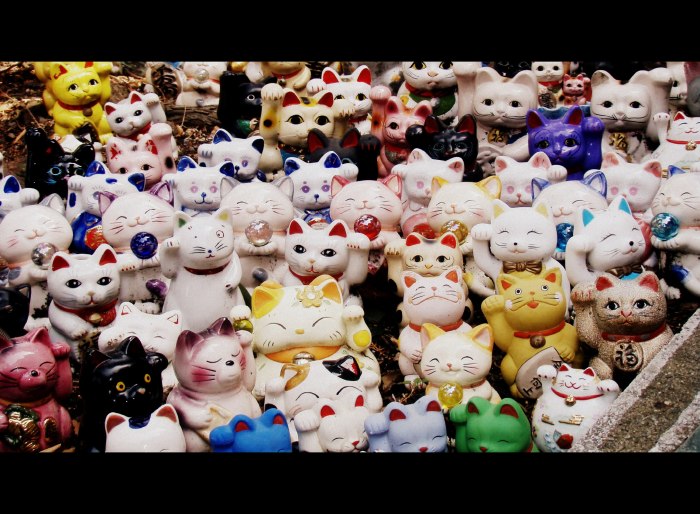 I love the triangle Daruma with their diagonal eyes

According to Wikipedia, there are many Awashima shrines in Japan, but Wakayama’s has the longest history. According to legend, the same Empress who dedicated the Niutsuhime temple, was caught in a storm near the Wakayama coast on her way back from invading Korea. Her prayers for deliverance answered, she enshrined a treasure here as thanks.

The reason for the mountain of dolls collected here is the belief they carry a soul and can only be safely disposed of through a ceremony. Most of the ceramic pieces remain, slowly encroaching into every space within the grounds, but the Hina dolls are taken out in boats on girl’s day, Hina Matsuri, blessed and then ceremonially burnt. 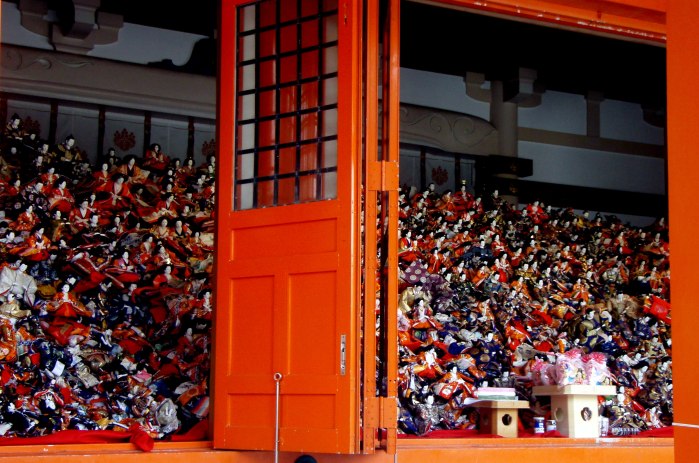 A wall of Hina dolls 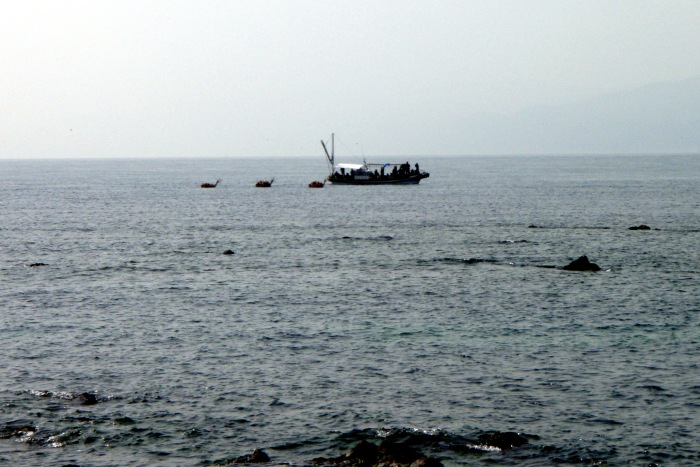 Three small boats carrying the dolls are carried over the water

Souls placated, the dolls are burnt

Awashima jinja is also considered a place to pray for fertility and protection against women’s diseases. The stacked ema boards relay hopes of healthy babies and easy deliveries, and little plastic bags, containing children’s underwear, are pegged alongside for the gods to consider. Elsewhere, within a shadowy, grate covered cave lurk a collection of unrealistically sized, wooden phalluses.

The Wakayama tourist organisation has directions on how to get there by train and a short walk.

Though at opposite ends of the prefecture from each other, Koyasan and Awashima jinja are iconic and memorable, and should be squeezed into any itinerary. Despite having seasonal perks, both are worth visiting at any time of the year.

Part 3 will focus more on closer attractions within Wakayama city itself.

13 thoughts on “10 Reasons to add Wakayama to your Japan Trip: Part Two: Spirituality and Samurai Graves”