After 3 weeks, Hikone has ceased to be “that place in Shiga”, but hasn’t quite become “home” yet. 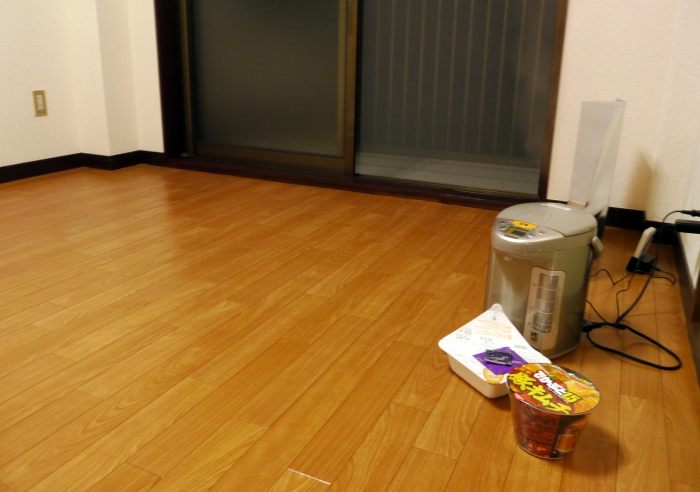 We have a little more furniture now

Hikone is the third city in Japan Nori and I have lived in, after over three years in Wakayama and a year in Naka-shi, Ibaraki, north of Tokyo, for 12 months prior to the Great Kanto Earthquake. The difference this time is that we are setting up by ourselves, without a family member to crash with or company apartment to move in to. The benefit of this is that we don’t inherit a stack of second hand, mouldy futons, dodgy electronics, useless (25 empty, “I just thought they might be useful”, VCR cassette cases, THANKS predecessor) or personal items (used toothbrushes, washing stools) to somehow dispose of. Problem was a week of eating on the floor.

Upcoming posts will show more of Shiga and Hikone. Even after only a month, I have some festival photos and some awesome karate shots lurking in my hard drive. It is a beautiful part of Japan with one of Japan’s few original castles, and  charming paved streets (with wide bike paths, I love it) lined with filigreed lampposts.

It is also the home of my favourite character, Hikonyan. (He is often the reason I give to people as to why we moved here, just for the !!!!!! reaction. )

But today, for those interested in the process, I’m going to talk about renting an apartment.

We went through Apanman Shop, a pretty large agency across Japan. The only other agency I’ve experienced is Leopalace which is meant for short-term business stays, but is well known for being easier for foreigners to rent through, and it’s the agency big Eikaiwa like Aeon use. Pros of Leopalace are furnishings provided and internet as part of the deal, cons are Leopalace are usually built in the cheapest areas, next to railway lines, or massive electricity girders, and are tiny.

We had a general idea of where in Hikone we wanted to live, ie not too far from the centre, but far enough away to reduce the price. We needed a carpark included, and were hoping to get a place with a low amounts of 敷金 （shikikin) bond and 礼金 (reikin) key money. The agent quizzed us a little on the area/criteria we wanted, then began handing over sheets of paper with apartment stats. 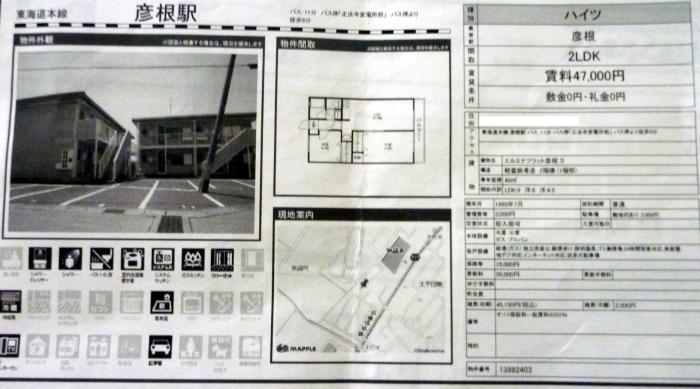 Wow, a lot of information, right? The sheets are good, once you know what is on them, as you can decide in the office what you really need, want and are willing pay for, or to sacrifice in order to get a bit cheaper rent.

Post earthquake, we both decided we really wanted a newer apartment. Anything within 15 minutes walk to the station increased the rent by 20000 yen (about $200) per month, so sadly that criterion was abandoned. We tossed up first floor vs second floor. Second floor is more popular in Japan, because it is considered more secure, less likely to be burgled. First floor can mean more space, with a bigger outdoor area. 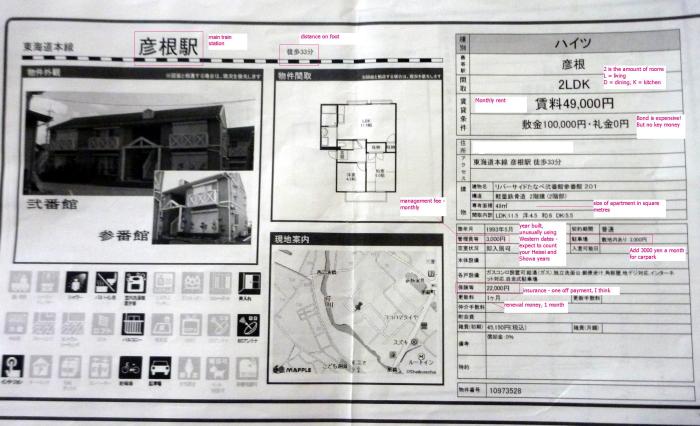 It is probably a good idea to bring a calculator if you (like me) are bad at adding up and keeping numbers in your head. The apartment sheets provide a lot of disparate information, and even a place with low rent might be more expensive overall when you add in the bond, key money, car park and management fees. 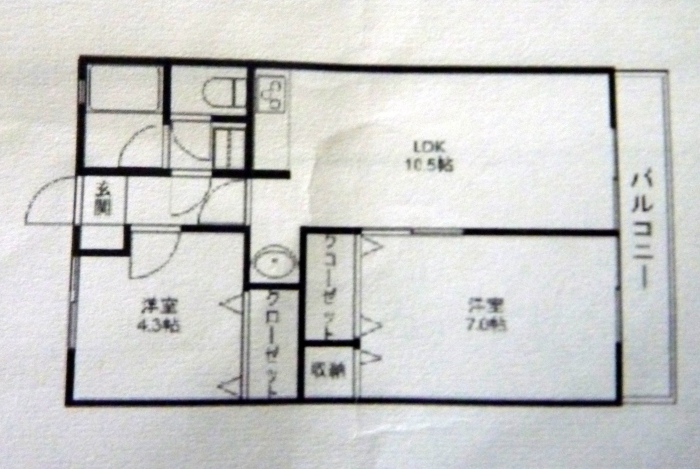 Here is a typical looking floor plan. The kanji 洋室 （youshitsu) means Western style room ie  wooden/lino covered, while 和室 (washitsu) is a Japanese style room, with tatami mats. The size of the rooms is often measured by how many tatami mats would fit in them. Both floor coverings tend to be soft, and, though normal wear and tear is allowed for, we’ve shoed all our furniture with spongy pads to reduce marking. 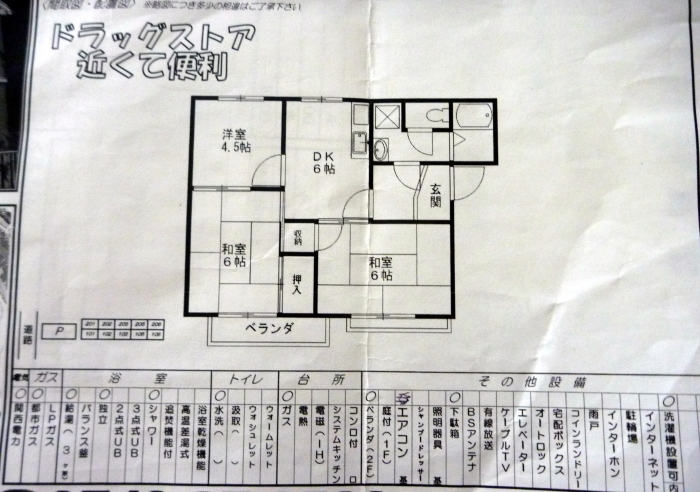 This one is really close to a drug store! At the bottom of the floor plan is a little easy to read through list of what utilities, extras or features the apartment has. This one has all the utilities hooked up, but no aircon, cable TV or elevator. 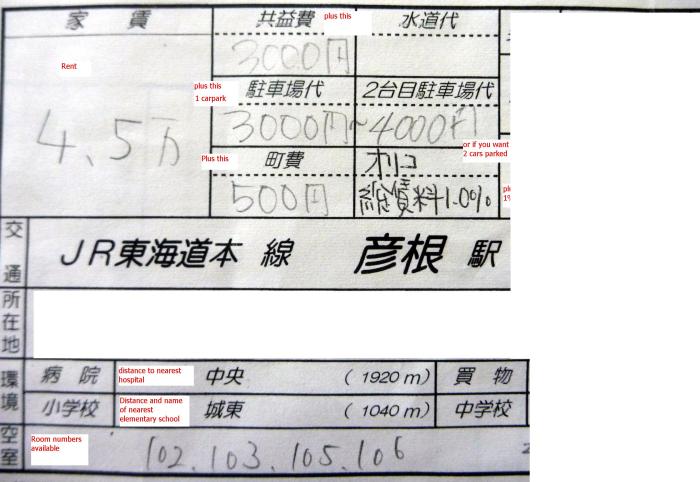 The cut-off box top right is Oriko tax of 1%. 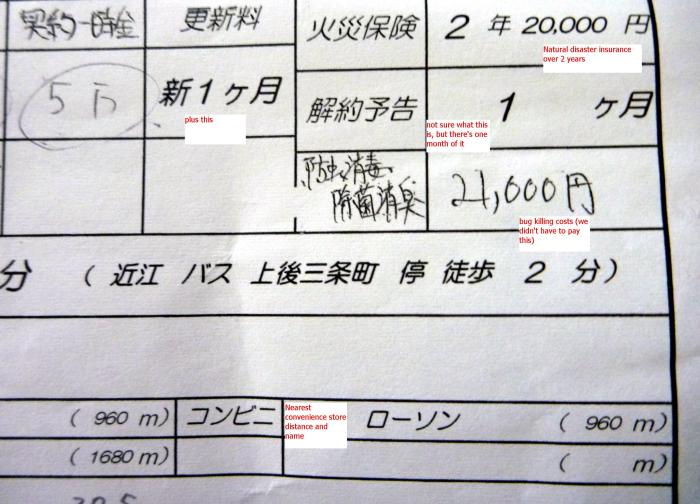 As you can see, lots of annoying factors and costs involved to weigh up. I love though how the names and distances to the closest supermarket and convenience stores are included. I personally think that’s important information.

From a stack of about 15 different apartments, we winnowed the selection down to two and were taken out for a look with the real estate agent. Neither looked that great from the outside, but while one had the bigger floor space, it had very boxy rooms compared to the other, which bordered onto a park and had a view like this: 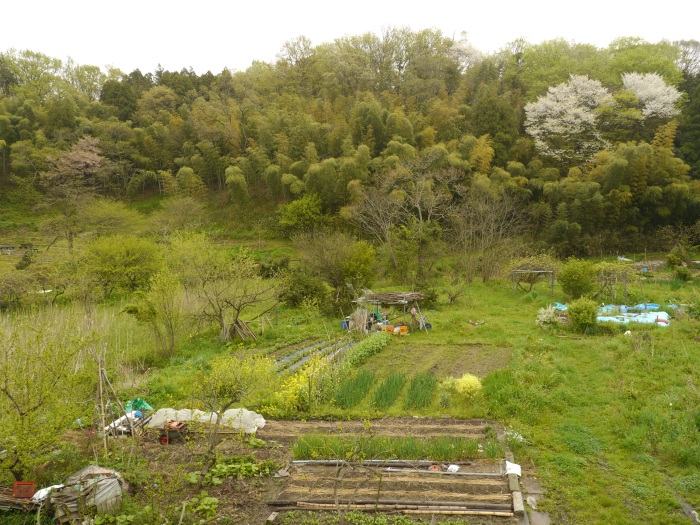 The view. Hard to believe we’re only 15 minutes bike from the city centre

Yep, no more next door neighbour’s wall scenery for me.

As we are both unemployed, we had to wait a nail-biting week to hear whether we had been accepted by the landlord, and my husband’s sister had to act as our guarantor.

Signing over the final bits of paperwork, we got to see all the costs on the one sheet of paper finally, including some extra services, such as ‘phone support’ for 8000 yen, and bug spraying for 20000 yen, and small presents for our 3 neighbours for around 3000 yen. All unnecessary costs, though the male real estate agent pressured us, politely, to get them. We ended up with three beautifully wrapped presents for our neighbours, but passed on the others. 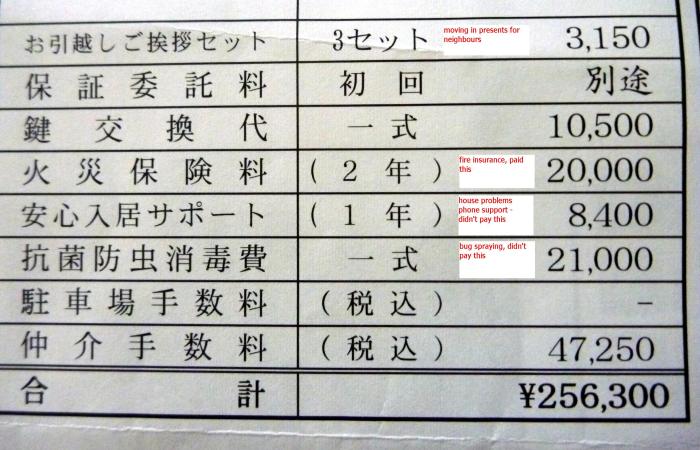 So there you have it. What can be expected from moving into an apartment in Japan.

As for life after moving in, every prefecture seems different.

Shiga, for example, seems to lock the gates to the rubbish boxes until the morning of pickup, requiring a 7am wakeup to dump the scraps.

The presents never got given, as within a week another person moved in, which would have left someone without a box of detergent, and apartment politics could go downhill. The park next to us is public, but at the same time actively farmed, perhaps illegally, by 6 different elderly people. Within a week, I was drafted into the local cleaning committee along with about 12  men and women from the apartment and surrounding houses and spent 50 minutes one morning helping to clean out the drains and weed someone’s garden. There wasn’t much to do, and the Japanese women and I spent most of the time politely scrapping over the carrying the weeds away chore (oh let me take that for you. No no I insist, don’t bother yourself.) and asking each other if we could leave yet.

I don’t know how usual this is in Japan, though it’s received a few “So. Japan.” comments. The other new apartment dweller, from a different part of Hikone, had never been part of this kind of crew, but she, being Japanese and very chatty, fit in quickly and, taking me under her wing, helped me figure it out too.

Hopefully that post was interesting to somebody for cultural or practical reasons, for those looking for a place. Maybe it will just strike a cord with others who’ve endured all the paperwork of  moving house.

Next time I’ll talk about an interview, some classes and a photo shoot I took part in with a local karate instructor, called Robert, and his wife and business partner, Chie. 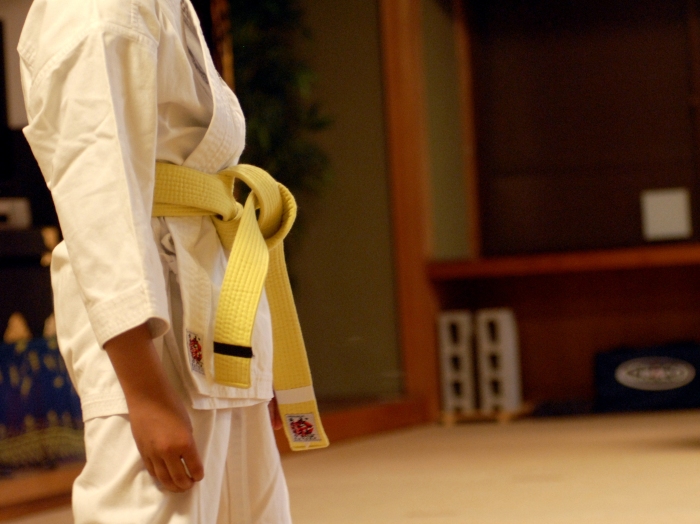 9 thoughts on “Moving to Shiga: setting up house in Japan”