Japan`s Birdman Rally, or the Tori Ningen (lit. Bird Man) matsuri is held annually in Hikone, Shiga in late July. There are similar international events, like the Redbull Flugtag, or the Yarra River Birdman in Australia, though as Tofogu notes,  where other contests aim for spoof value, driving cars with tiny wings off ramps and the like, Japanese university teams take this challenge very seriously with most teams from institutions with a long tradition of Birdman, some taking part since the beginning in 1977. One student admitted to attending six by himself.

The rally was actually `won` in 2008, with a record breaking flight of 23 metres, and after a one year suspension in 2009, the Rally returned to annual event calendar to the joy of university engineering students and spectators alike. 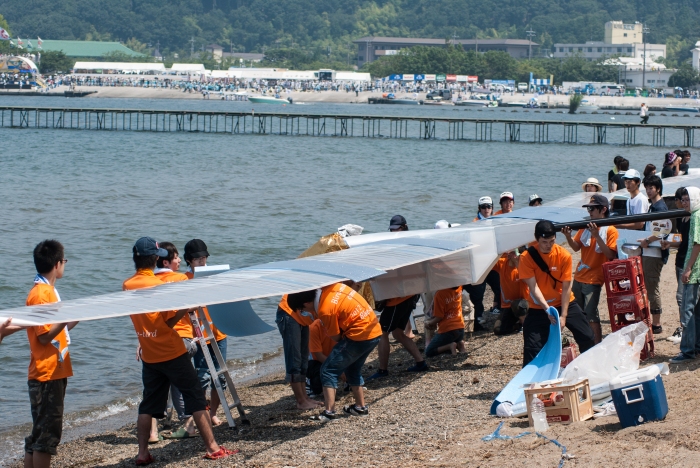 Teams line up along the beach, waiting for their turn to jump. 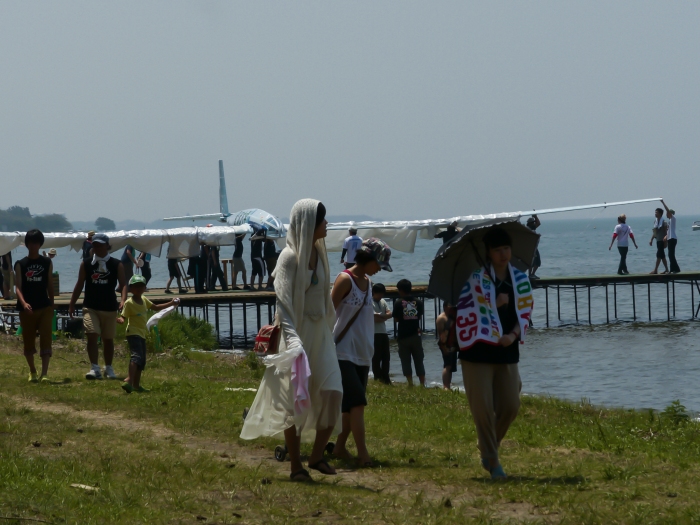 Held in the middle of summer, spectators duck in and out of the shade from the trees, and take frequent dips in Biwa to cool off.

Held over two days, the last (scorching) weekend in July, teams attending from across Japan and occasionally from abroad, with small group from Holland attending in 2012 Birdman.

Starting around 11am on Saturday, the contest runs until late Sunday afternoon. A large crowd of spectators, both local and tourists, watch from beneath a wonderfully shady fringe of trees, or while floating in the waters of Lake Biwa. Their children don’t watch at all but have a lot of fun chasing bugs. Wind surfers enjoy attention during the frequent breaks.

Propped on the graveled shore of Lake Biwa, gliders and their teams stake out their zones with blue tape, tarpaulins rigged for shade and generators to keep their drinks cool. In the distance, on the massive pier, 500 metres long and 10 metres high, planes prep for the launch, watched closely by TV cameras and a nearby helicopter.

One by one, each team takes the dive, some slamming straight into the water others start encouragingly before a gust of wind turns them back the way they came. Occasionally it sends them gliding into the distance.

All eventually get wet. 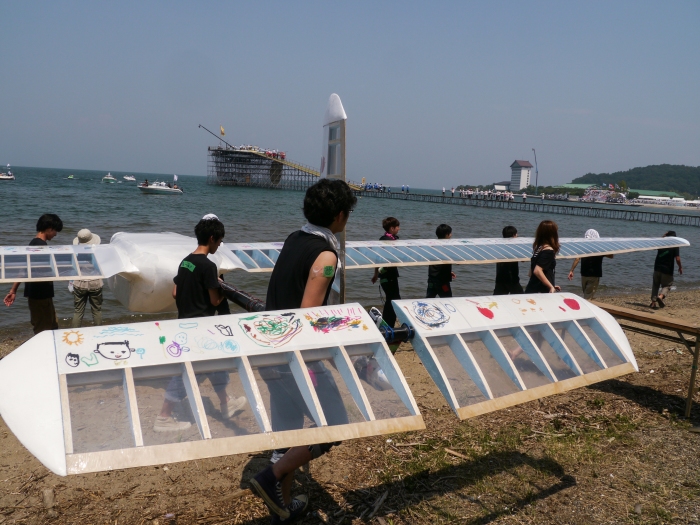 A plane is decorated with cute drawings for good luck. 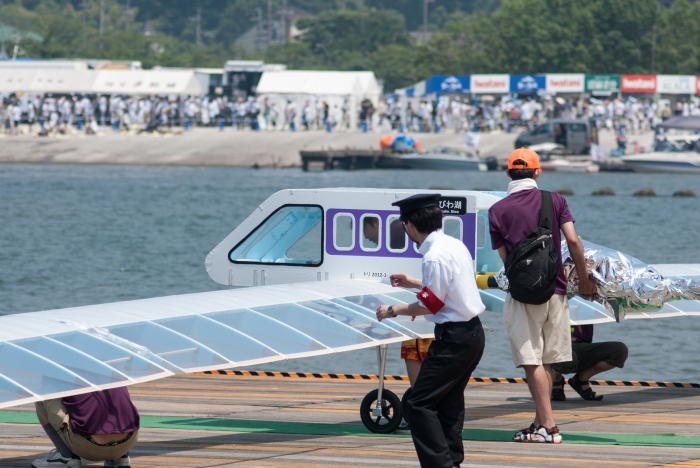 A plane finally makes it onto the runway. 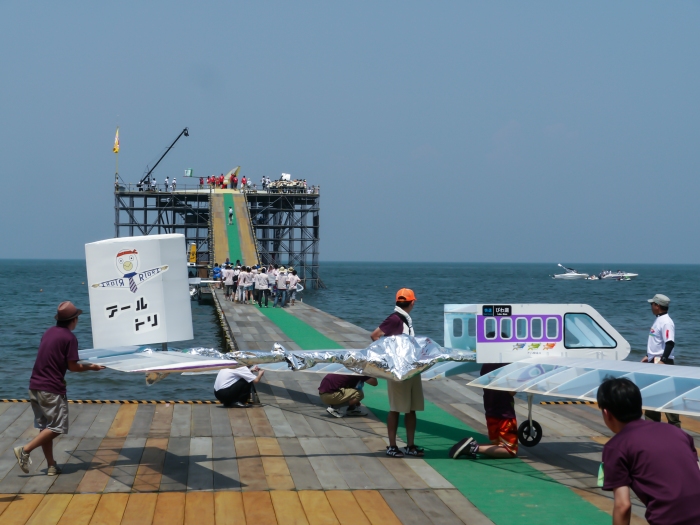 Three to four teams waited on the 500 metre stretch at any one time, while their predecessors complete the loop as they float back to shore.

The red flag goes up 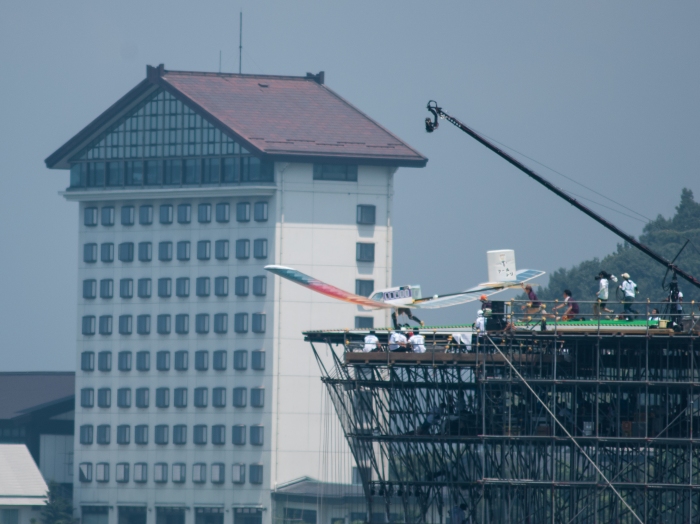 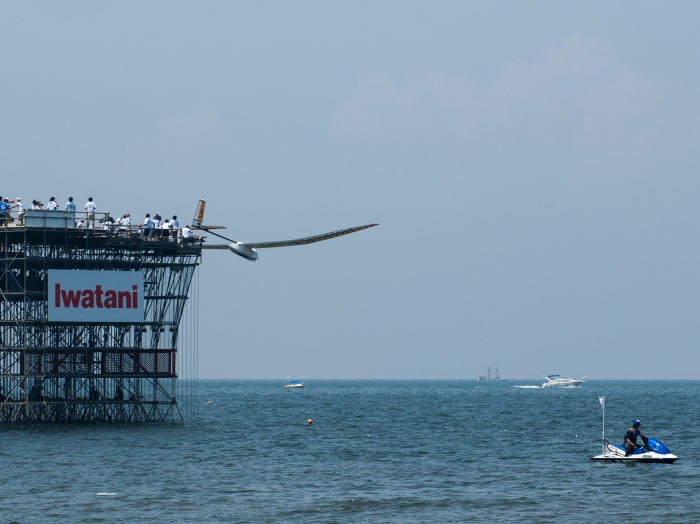 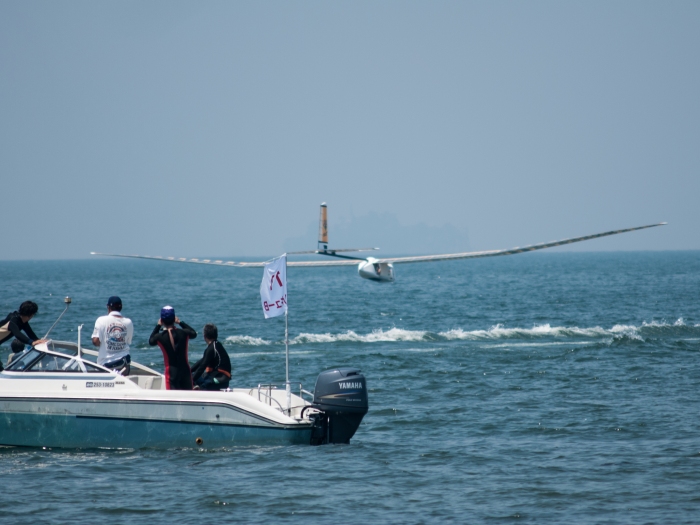 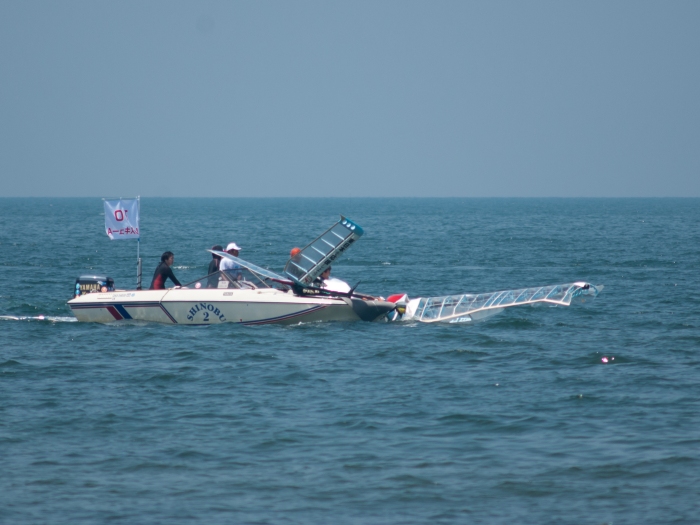 After all the waiting I don’t know whether hitting the water would be a sensation of disappointment or cool relief.

Teams of jet  skis and speedboats rushed to the scene of each crash, freeing pilots from the wreckage and dragging the pieces back to shore. After being in a glider (or the helicopter), they looked to be having the most fun.

Despite the heat and the occasional long spell between flights as the TV crew does interviews and promos, Birdman Japan is an amazing, entertaining day out, with kakigori (shaved ice) and beer stands nearby to help cool spectators, it’s worthy of a slot in Japan’s busy ‘Must See This Summer’ calendar of events. 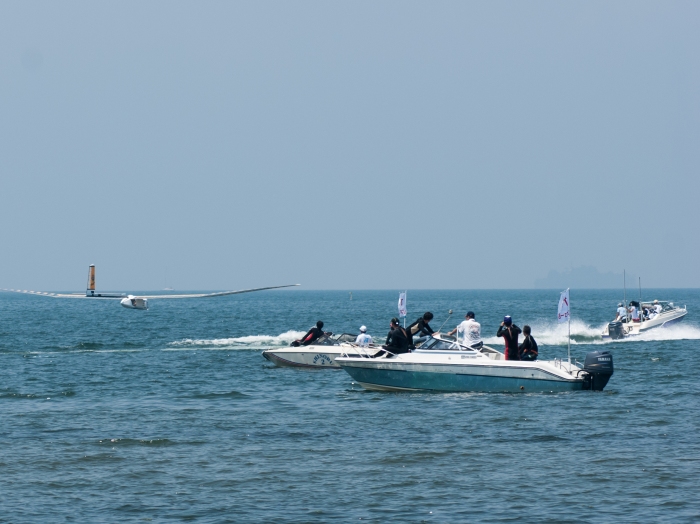 How does one join the boat crew for next year?

13 thoughts on “The Biwa Birdman”