The sun rising on our second day of riding Lake Biwa.

What is it about the big, physical challenges that make them attractive, bucket-list items even to those whose general level of activity hovers between stroll and gentle jog? Every year thousands turn up to climb Mt Fuji, hike the Kumano Kodo,  or ride around Lake Biwa, Japan’s largest lake, determined to get to the end despite blisters, altitude sickness, muscle pain, rain, wind, bears, whatever.

Ryann and I have been doing the Where Next Japan video series together for over a year now. As a celebration of our hard-work, of Ryann’s new job in Guam, and of our friendship, we thought we would spend her last weekend in Japan riding around Lake Biwa.

Ryann, chipper at the beginning of our Biwa ride, when our wet weather gear was still doing its job.

The weather forecast had been predicting rain for Sunday all week. On Saturday afternoon, we caved and booked a hotel for our overnight, instead of camping as we had intended. A very happy choice indeed.

Leaving from Maibara at 5:30am on Sunday morning, we had our first misadventure, as I went to pump the tires, to “protect from punctures” as my concerned husband had remonstrated, and managed to deflate it entirely when the reflector cap pulled out the entire valve stem. Panic set in… for me. Ryann was relatively calm throughout the process of finding a nearby 24hr Lawson and borrowing scissors to pry out the valve, and re-inflate the tire.

An hour or so later, we were safely on the road. The rain slowed to an occasional patter. My clothes began to dry out. We enjoyed the calm and quiet of the very early morning ride, as we rode the less populated northern shore towards Kinomoto. 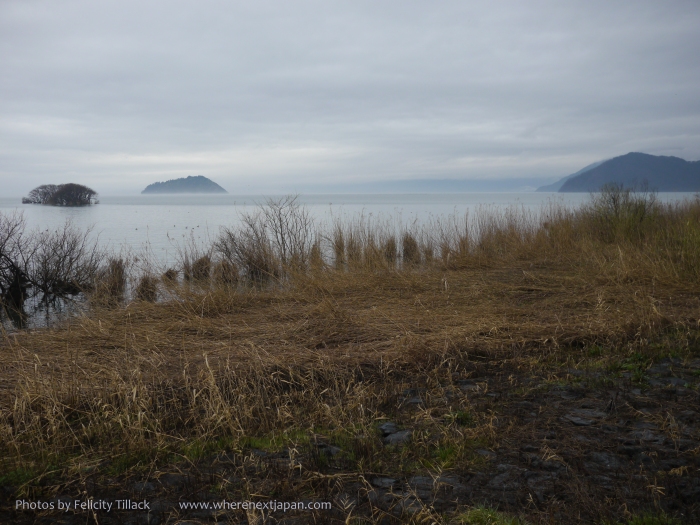 Perhaps the scariest part of the ride came when we left Kinomoto, and had to cross through the mountains via a tunnel. The bike path was narrow, and the road was busy with trucks, all driving very fast, all creating thunderous noise and echoes. I rode relatively slowly, fearing that my wet tires would slip on grates, while Ryann rode like a crazy woman, unwilling to spend any longer than necessary in the fume-filled confines.

The experience made us very tunnel-shy, and we tried multiple ways to avoid the next one near Nagahara, including attempting a 10 km detour on mountainous roads. Defeated by the slope and the, now very cold, very insistent, rain, we found the bike-path through tunnel was almost as wide as the road, much better lit, and with less traffic. Warmer, and out of the rain, I was sad when it ended.

A rainbow to give us strength as we began the soggy slog south.

The north is gorgeous. Quiet and wild, the road along the lake cuts between the forested mountains and the shallow, rocky waters. Even in the rain, even at the very end of winter without any sakura blooming, it was beautiful and calming.

One of the best parts of the trip, was coming down through Makino, a summery, camping spot that was almost completely uninhabited in early spring, and discovering an open, inviting Indian restaurant called Raju. They were very good about us leaving huge puddles under the table, and the food was delicious. Perhaps the only thing better that this was seeing the hotel finally, through the rainy mist.

Better weather on the second day.

Monday was much drier. We reluctantly left our lovely, warm hotel at 5:30am, to try and catch the sunrise, though it teased us through a bank of clouds that still hadn’t fully moved away. The wind was up, though it usually blew across us, not against us. When the sun finally fully came out, we took frequent rests on Takashima’s many beautiful beaches.

We maybe took our time a little too much on the second day, just enjoying being warm. I think to enjoy more sightseeing, that maybe three days are necessary. We stopped at the famous floating gate of Hiyoshi shrine, with a surprisingly busy, difficult to cross highway running alongside it. 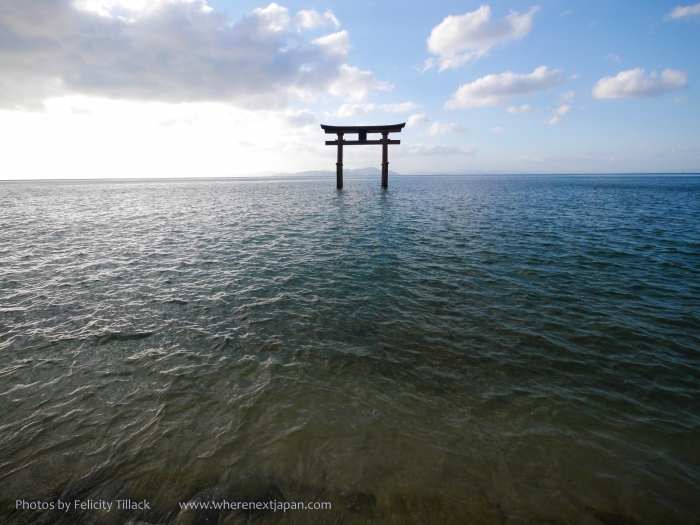 We stopped at coffee shops, and restaurants. We had to stop in Omi-Hachiman to get the slow leak in Ryann’s front tire fixed (The same tire I deflated in about a second. Coincidence?) We pushed hard against a headwind until Hikone, and limped into Maibara in darkness.

The sun setting as we entered Hikone. Despite running against the clock somewhat, we still took time out to enjoy moments like these.

Despite what sounds like, and was often, a grueling and difficult ride, there wasn’t a point during the whole journey when I wished I wasn’t on it.

I realised gratitude for small things: ziplock bags, dedicate bicycle lanes, the wind at my back. I was with my best friend, an excellent travelling companion, having an adventure. Experiencing all the lows accentuated the many highs, and I guess that’s why these tough treks are worth all the effort.