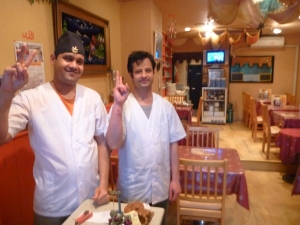 The young Nepalese restaurant worker had no idea what I meant when I asked him if he had experienced culture shock, and after explaining he was quick to reply in the negative. No culture shock. Japan is a great place to live. No counter culture shock either. Home is home – the place he will return to one day with his family.

I wondered if perhaps I had explained culture shock badly, or did he really feel entirely comfortable living in Japan? He mentioned only knowing a handful of people outside of work, and having no Japanese friends, though his language skills were fluent. As a Buddhist, he mentioned enjoying living in a country with similar values, and also more practically, where he made enough money to both feed himself, and send home.

The Wikipedia definition describes culture shock as being  the personal disorientation a person may feel when experiencing an unfamiliar way of life due to immigration or a visit to a new country, or to a move between social environments.

On the surface, culture shock seems to be a reasonably simple concept. Person moves to new place, gets overwhelmed by the unfamiliar which churns out bad vibes of increasing frustration and resentment.

But the psyche is never going to be that easy to figure out. Culture shock triggers are various, sneaky and often influenced by chance events in a person’s experiences rather than the general characteristics of a country or culture.

Personally, I have not (yet) experienced Japanese culture shock. Perhaps being prepared for a vastly different culture to my familiar Aussie one helped? Perhaps falling in with a crowd of cheerful, young people to travel and party within 2 weeks of touchdown cushioned me against strong homesickness? Moving around Japan, living in different cities, and having less fortunate timing in making friends, I have at times felt very lonely, but those feelings never mixed into a sense of blaming Japan for it.

Unfairly, this beautiful country remains foremost in my memory as being full of angry supermarket workers who growl for exact change and then berate me for being so slow finding the unfamiliar Euros.

Was it because I expected Europe to be similar to Australian culture – mentally lumping all Anglosaxons into one cultural basket – that I got such a shock? Was it just the bad luck to have such cranky shop assistants at the only supermarket near my apartment? Explanations nor other more positive experiences cannot erase the belief that Germany and I did not mix well.

There will be those irritated with me for that. Expats who live and work in Germany, love it, who’ve never had a bad grocery shopping experience or been yelled at for not speaking German. I know. I often feel defensive when people complain about Japan – the lack of decent Mexican food, been made to feel self-conscious in public, or had their bike stolen multiple times. It’s not Japan’s fault, any more than it was Germany’s. But we still feel a sense of wariness about the country that made us feel that way.

It’s even worse when it’s your own country. When the curse of counter culture strikes, it feels like a betrayal. All those months or years of yearning for home, for the food, for ambient conversations that can be understood (so you know they’re definitely not talking about you), for feeling like you belonged again.

But instead, it’s noticing all the things that don’t work. The lack of any payphones in the Gold Coast international airport, the slow train system, the terrible sushi. Comparing everything to Japan, and pissing off everyone while doing it.

As far as intrinsic travel buzz-kills go, culture shock is nearly as nasty as jet-lag. The affects hang on and resurface, similar to malaria, only there isn’t any team working to reduce the symptoms or develop a vaccine.

Maybe I should go back to that Indian restaurant, and ask the waiter again what he, seemingly at ease abroad or at home, would suggest to those having more difficulty.

Or maybe I could ask my blog readers for their suggestions.

Have you had a bad culture/counter culture shock experience? Have you found a way to avoid it?

2 thoughts on “Culture Shocked Us”