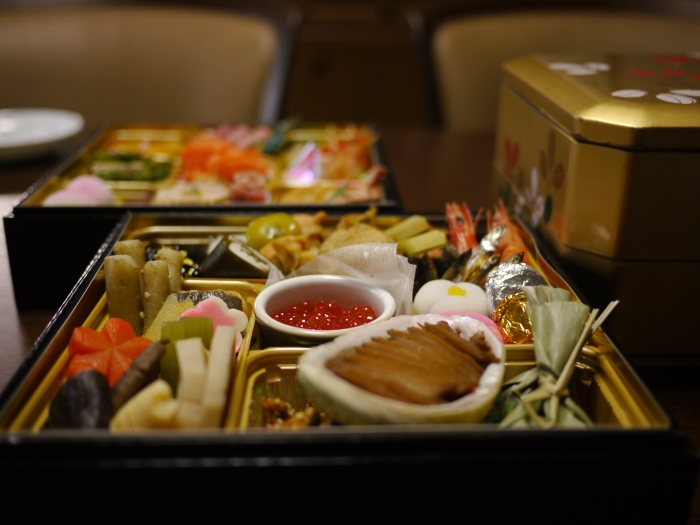 Like many families, the intricate and beautiful New Year’s delicacies are no longer made in the home, but ordered and dropped off just in time to eat.

Second Japanese New Years, and I’m starting to fit in. There is a rhythm to learn, like the Christmas feast and family rhythm in Australia. An Aussie food Christmas, at least in my home, was brekkie of sliced, cold ham off the bone and eggs, followed by the main show, the extravagant spread of lunch – plates of BBQ’d meat, bowls of salads, piles of rum-balls.  Then lying around digesting for a bit. Dinner was… for those stomachs still hungry… scavenging from the lunch leftovers.

In Japan, the food rhythms start on New Year’s Eve, with otoshi-koshi soba – a bowl of noodles eaten as the midnight Shinto bells toll, timed to overlap the old year and the new. My family likes the soba, but not the waiting however, and we eat at 6:30pm.

This year, my tipsy and cheerful father-in-law decided to teach me the way of soba. He showed me the various liquid bags and powdered satchets of dashi (fish broth) I could use; had me slice the kameboko (solidified fish paste… which sounds bad, but actually is delicious); and indicated the small amounts of soy-sauce and mirin that should be mixed in. Finally the soba noodles went in, and boiled until they floated on the surface. A deep-friend prawn went into each bowl, and our otoshi-koshi soba was complete.

New Years breakfasts, done traditionally, must take forever to prepare, though many families these days confine themselves to Ozoni – a region specific bowl of miso-soup and mochi.

Ozoni – miso broth with mochi. Every prefecture, even region and city sometimes, do this a little differently. In this house, it’s a pretty standard broth, with a few veggies, but the mochi is round, unlike northern prefectures.

It’s perhaps unsurprising that the factory food looks better than it tastes – though it does reduce the preparation and stress involved in the week prior. It’s very filling too, and the food lasts all day.

On the 2nd, in the evening, the uncles, aunts and cousins will come here to the main family home for crab and pork hot-pot. Crab is again on the menu on the 3rd, meeting the other side of the extended family at a crab restaurant.

Packets of raw crab defrosting in the morning before the big, family nabe (hot pot) party.

Japanese New Years, and I’m finally starting to understand. There is no chance of being hungry for 3 full days – so do not snack, do not eat dessert… basically fast as much as possible in the weeks prior – and you will fully enjoy the rhythms and tastes of a mostly traditional Japanese New Years.

Another twist on a tradition: my sister in law receives New Years greeting cards from the various boy-bands she supports.